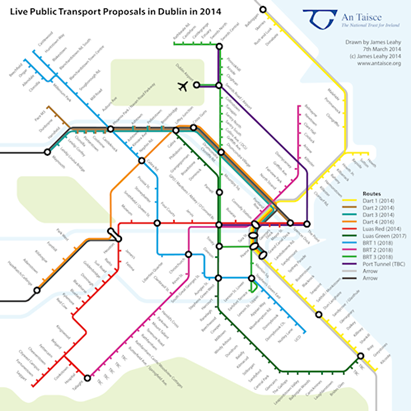 An Taisce has published a map in the style of the “London Underground” of current transport proposals that it hopes will soon become a reality in the greater Dublin area.  The map includes the Red and Green Luas lines, the Phoenix Park tunnel, electrification of the Maynooth and Kildare lines and the three Bus Rapid Transit Routes.

Speaking about the published map, James Leahy of An Taisce has said “If the plan works, as it has elsewhere, we will have a system that could be extended to cover the whole city to serve all. This can never happen with rail projects alone, in our sprawling low-density city. To compete with other European cities we need to provide a city that is attractive and liveable and this makes this possible.”

The proposed plans would see the greater Dublin area provided with an integrated transport network that would significantly improve public transport services in the city and could be a potential solution in easing traffic congestion in the capital and help improve Dublin’s carbon footprint. 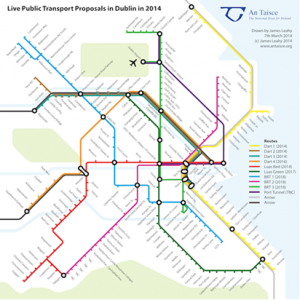 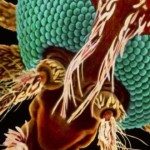 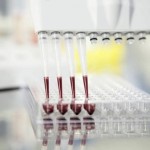