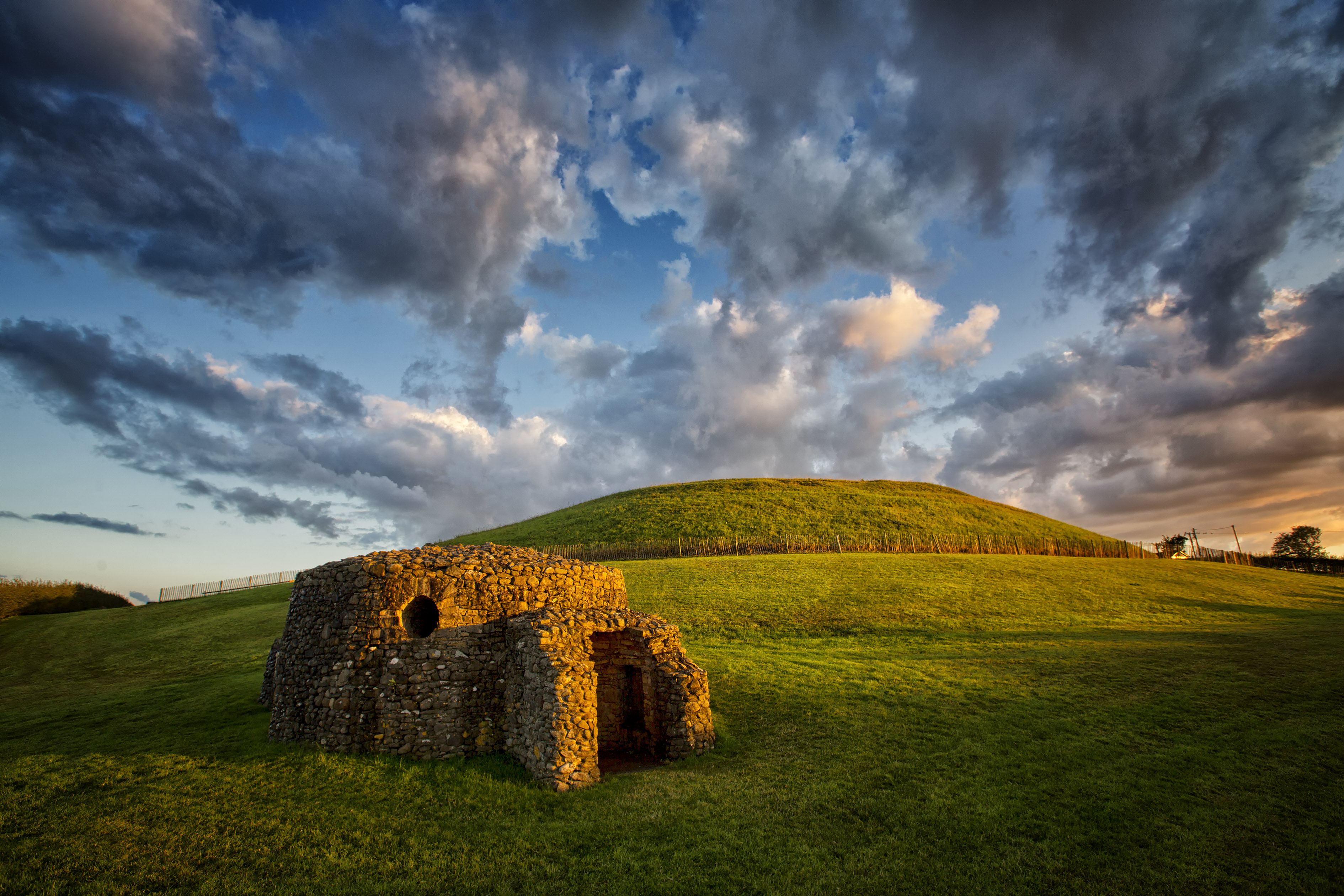 You’ve travelled the Wild Atlantic Way and now it’s time to head in from the coast and back towards civilisation. And in Ireland’s Ancient East there isn’t just one kind of civilisation but many; all from different ages.  Around every corner there are echoes of Ireland’s past still adorning the landscape.  This region holds some of the world’s finest examples of prehistoric ingenuity, a wealth of early Christian monasteries, massive medieval castles and sprawling abbeys, as well as great landed estates.

Central to the concept of the Ancient East are the many different stories attached to each site. Designed to give the region a tourism focus, one is invited to create a ‘story’ through one’s own personal discovery of Ireland’s historic heritage.  And there is certainly no shortage of stories to discover. Here we give our own rundown of just some of our favourite sites in Ireland’s Ancient East, along with their fascinating stories.

This hidden castle in Co Louth was built in the thirteenth century, and is one of the finest examples in Ireland from this period. On top of that, it is the only one from the period that was constructed by a woman. However, legend isn’t very kind to this early female ruler. The story goes that Lady Rohesia de Verdun promised her hand in marriage to the architect who built her a castle at Roche. On the night before the wedding she asked her future husband to peer out a large high window to look over all the land that would soon be his. When he did she pushed him to his death. If you pay a visit I suggest you stick to the ground floor.

This spectacular estate in Celbridge is one of the finest of its kind in Ireland. Built between 1722 and 1729 for William Conolly, the wealthiest commoner in Ireland, the house contains 100 rooms and set in 120 acres of beautiful landscape grounds stretching down to the river Liffey. The house is of such scale that it has been called, “the only house in Ireland to which the term ‘palace’ can be applied.”  When Conolly died in 1729 his widow Katherine continued to live in the house and commission a number of follies (such as the Barn and Conolly Folly) to keep the local people employed during periods of hardship. She may also have hired a few locals to help her keep those 100 rooms clean.

The Boyne valley in Co Meath is host to some of the finest prehistoric tombs in the world. Most famously it has Newgrange, Knowth and Dowth. However, there is more to the area than that. Near the village of Oldcastle, located at the north of the valley, there is the tomb cemetery of Loughcrew. The name Loughcrew – Sliabh na Caillí – translates to “Hill of the Witch”. In the folklore, the monuments at Loughcrew were formed when a witch called An Cailleach Bhéara was challenged to drop an apron full of stones on each of the three Loughcrew peaks. If she succeeded she would have been proclaimed ruler of all of Ireland. Of course we know now that she didn’t, but fell to her death instead. There is a running theme here.

The passage tomb of Cairn T at Loughcrew has some of the finest examples of Meolithic art in Ireland. If you visit during the equinox in spring or autumn you will witness sunlight entering the chamber, illuminating the tomb within.

Glendalough is one of those otherworldly places where natural scenic beauty and ancient heritage combine into a single magnificent experience. Its status as one of Ireland’s most renowned historical sites is well earned. Translated as the “Valley of two lakes”, Glendalough is a glacial valley and an Early Medieval monastic settlement founded by St Kevin in the 6th century. It’s monastic sites include churches, a cathedral and a round tower. But a more overlooked treasure can be found in the surrounding fields. Known as bullaun stones, these hollowed out bowls scattered throughout a Glendalough field called Seven Fonts are a remarkable example of one of the areas lesser known treasures. They were most likely used as holy water fonts or as large mortars for crushing herbs or minerals.

Clonmacnoise, in all its peace and tranquillity was once at the crossroads of the two major routeways of Ireland: the mighty river Shannon and the Slí Mór (meaning “The Great Way’). The strategic location of the monastery helped it become a major centre of religion, learning, craftsmanship, and trade by the 9th century and together with Clonard it was the most famous in Ireland, visited by scholars from all over Europe. Now, Clonmacnoise is one of Ireland’s most iconic historic sites and one of the best places to encounter early medieval Ireland.  Close by, one can discover another gem of medieval Ireland; the monetary at Lemanaghan and the shrine to its founder, St Manchán, a monk from Clonmacnoise.

The beautiful town of Lismore by the river Blackwater is as full with historical sites as it is charming. From the lovely gardens, to St Carthage’s Cathedral, the castle and the abbey, there is an abundance for any visitor to see. One of the more peculiar sites, The Towers of Ballsaggartmore, is located just outside the town. The towers are said to be commissioned by Arthur Kiely-Ussher around 1835 after his wife became envious of the castle of Arthur’s brother. Extravagant plans were drawn up and construction began. There built a long winding carriageway with an ornate gate lodge and bridge. However, when it came time to build the actual house the funds had dried up. A newspaper at the time called it, “the crowning folly of them all”, and it is certainly that. But today is also a wonderful setting a peaceful walk.

The Rock of Dunamase, Co Laois

On the low-lying plains of Laois, the Rock of Dunamase stands out in its dramatic ruin. The fortress was said to be part of a dowry paid by the king of Leinster Diarmait Mac Murchada, when his daughter Aoife married Richard de Clare (aka Strongbow), the leader of the Norman invasions. He appointed Meiler FitzHenry to hold the castle, which was on the dangerous and unsettled borderland with powerful Gaelic Irish tribes. Later, the famous knight William Marshal continued the work begun by FitzHenry, and transformed Dunamase into a truly formidable fortress. The Castle fell into a slow decline up to the middle of the 17th century when it is believed to have been finally finished as a stronghold by Cromwellian forces. Today, the ruins are a wonderful site for exploration and catching the lush vistas of Laois.

Lough Gur is a unique place in Ireland’s Ancient East as it is the only area in all of Ireland where you will see visible remains of every age of mankind throughout the centuries. The horseshoe-shaped late has been the focal point for settlements since the beginning of the Neolithic period, and there is much they have left behind. One such story surrounding the lake is that of Gearóid Iarla. It is said that he was banished to the bottom of the lake by the Goddess Áine, but he will return to the surface every seven years in an effort to break the curse that was placed upon him. Once the silver of his shoes wears thin Gearóid will walk among us again.

Kilkenny is well established as the most uniquely medieval city in Ireland. Its medieval heritage is found in its narrow streetscape, its historical buildings and its landmarks. However, the city’s origins predate existing medieval landmarks. Saint Canice (who gives Kilkenny its name) founded a monastic settlement here in the sixth century. The ninth century round tower beside the wonderful stone cathedral of St Canice’s is a remaining monastic landmark. Built in the 13th century and a showcase to ornate stonemasonry skills, St Canice’s is the second longest Cathedral in Ireland.

One of the most striking attractions in Kilkenny is the Kells Priory. This enormous site has the appearance of a large castle, with high walls and strong towers, but despite its military appearance it was a monastic foundation, founded by the Norman knight Geoffrey FitzRobert circa 1193 for the Augustinian canons.

And of course, as is a persistent theme of medieval Ireland, the woman don’t usually fair too well. Ireland’s only witch trials took place in Kilkenny in 1324 (supposedly Europe’s 1st witchcraft trials). Dame Alice Kyteler (Innkeeper and Moneylender) was accused of using poison and sorcery against her four husbands, having amassed a fortune from them. Before she could be tried, Alice fled to England, but her maid was flogged and burned at the stake.

This one is a little different, but after all those heavy hitters, I thought it best to finish with something a little more humble, and perhaps a little less ancient. Laragh is the 19th century church for the Church of Ireland. It is said that it was brought back to Laragh by the mill owner and his wife from their honeymoon in Switzerland where she saw and fell in love with it. Designed in a Swiss-gothic hybrid style, the church is constructed entirely out of corrugated iron and sites in a small narrow wooded valley alongside the river.

The beauty of the church is in the details. The landscaping around the church is designed to imitate and suggest a small mountain glade with rocky outcrops around the church. To ensure that no regular edges exist other than the chapel itself, rocks and stones have been built around the chapel in mounds to create crevices and irregular outline to the raised platform on which the church sits. Even the gateway has received this treatment to ensure the victory of the picturesque over practicality in this little outpost of the Industrial age. 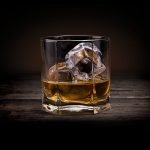 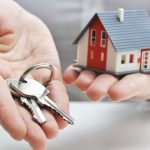 Irish property prices to increase by at least 8% in 2017