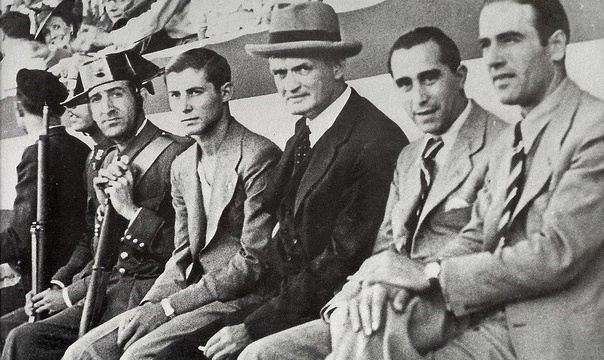 He was the Irishman who became the first player from his country to represent Manchester United and who went on to save Barcelona at a point where they faced the very real threat of extinction. This extraordinary achievement was just one in a career of highs for Dublin-born Patrick O’Connell, who captained both Manchester United and Ireland and also won the Spanish La Liga with Real Betis – the only time the Seville club has managed such a feat. But 20 years after those successes, ‘Don Patricio’ died destitute in ramshackle conditions in a London fl at and for the last 40 years has remained in an unmarked pauper’s grave. “No one really knew what had happened to him for a very, very long time. It was a bit of a mystery,” explains Sue O’Connell, who is married to Patrick’s grandson Mike.

Some years ago, Sue set out to explore Patrick’s legacy and decided to commemorate his life and achievements. There were quite a few, as she quickly discovered. A fund has now been set up to properly honour Patrick’s memory with dozens of some of the biggest names in world football, including Franz Beckenbauer, Johann Cruyff, Bobby Charlton, and David Beckham all lending their support. Last month he was inducted into the Football Museum in the UK and the Professional Footballers Association will donate €1,000 to the fund later this month.

THE STORY OF DON PATRICIO

Many fascinating personal stories have become lost in the tide of Irish sporting history over the years, but few are as compelling, or have had as much impact on the face of world sport today, as that of Patrick O’ Connell. The Dublin man not only became the first Irish player to pull on the famous red jersey of Manchester United, but also went on to exert a profound influence on the nascent footballing institution of FC Barcelona during a tumultuous time in Spanish history.

Were it not for the pivotal contribution of the man who was known in Spanish footballing circles as “Don Patricio”, the entire existence of FC Barcelona as we now know it would have been thrown into jeopardy. Not only was O’Connell instrumental in preserving the continued existence of the Catalan giants at a critical moment in its history, he also played a highly significant role in the early history of the Sevillean club Real Betis, as well as that of Northern side Racing Santander.

A recent TG4 documentary on O’Connell’s life, entitled Paddy Don Patricio, unearthed the extraordinary story of the Dubliner’s career, prompting renewed interest in the life of a man whose legacy can still be seen in the stellar achievements of Barcelona on the European stage. Patrick O’Connell was born in Drumcondra, Dublin in 1887. Growing up, the young O’Connell exhibited a keen interest in all sports, but football soon emerged as his chosen vocation.

Having first lined out for local side Stranville Rovers, he eventually joined Belfast Celtic, a club with strong Catholic and Irish nationalist roots who continued to play in the Irish league until forced to withdraw in 1949. After an impressive spell at the Belfast club, he attracted interest from several cross-channel clubs, going on to enjoy a successful stint at Sheffi eld Wednesday, during which he established himself in the centre of defence for both club and the Irish national team.

A further short stay at Hull, combined with a series of impressive displays at international level, brought him to the attention of Manchester United, who signed him for £1,000 in 1914. O’Connell was therby granted the distinction of being the first in a distinguished line of great Irish players to line out at Old Trafford. He joined United at a low point in its history, when, after a run of recent successes inspired by great players such as Billy Meredith, they had slumped to the lower reaches of the League and had become mired in a betting scandal involving players from their own squad as well as from rivals Liverpool FC.

Despite these diffi culties O’Connell succeeded in establishing himself as an accomplished defender for the Manchester Club, playing 34 times in the 1914-15 season and scoring twice. At international level, O’Connell’s greatest achievements as a player were his contributions to the Irish team who emerged victorious at the 1914 British Home Championship, the last to be played before the looming shadow of the First World War cast a pall over football in Britain.

Ireland beat Wales 2-1 en route to a memorable 3-0 victory over England at Ayresome Park in Middlesborough. Overall victory at the Championship was secured with a 1-1 draw against Scotland at Windsor Park. Although he won only 6 Irish international caps in total, O’Connell’s performances in defence were a key element of Ireland’s unlikely success at the Championships.

Unfortunately, in 1914 O’Connell’s playing career was brought to a halt by the outbreak of the war, when the English League was suspended indefi nitely. Though he remained on the books of Manchester United throughout the war years, O’Connell would never again have the opportunity to pull on the famous red jersey. In the aftermath of the war, O’Connell resumed his career as a player with Dumbarton in the Scottish League, before winding down his playing career in humble fashion with non-league Ashington.

Serving as player-coach in the 1921/22 season, O’Connell quickly demonstrated an aptitude for man-management and tactical reasoning. These abilities would serve him well in the adventure he was about to embark on as a manager on the continent. As impressive as his achievements were as a player, they would soon be eclipsed by the drama and success of his career as a manager in Spain.

Through sheer good fortune, O’Connell was offered the post of manager at Racing Santander after the Northern Spanish club lost their English manager, Fred Pentland, to rivals Athletic Bilbao. Pentland, nicknamed El Bombin due to his trademark bowler hat, went on to become the first successful British manager in the Spanish league, leading Bilbao and Atletico Madrid to domestic glory.

Succeeding the well-liked Pentland at Santander, O’Connell immediately commanded the adoration and respect of the club and its supporters by leading the side to fi ve regional titles before the club were accepted into the newly formed La Liga in 1928. Having somehow chanced upon the position as Santander’s manager, O’Connell solidifi ed his position with his innovative coaching techniques and sheer force of personality – soon acquiring the respectful sobriquet of “Don Patricio”.

After helping to establish Racing Santander as a force in the formative years of the new Spanish league, O’Connell served for a short time as coach of Real Oviedo in the Segunda Division, before moving to the Sevillean club of Real Betis, then known as Betis Balompié. Having guided them to promotion from the Segunda Division, O’ Connell led Betis to its fi rst and only Primera Liga title in 1935, a historic achievement for a club regarded as one of the lesser lights of Spanish football, and a poor relation of its local rivals, Sevilla FC.

As fate would have it, the decisive match which would clinch victory for Betis was an encounter with O’Connell’s old club, Racing Santander. In the first of many controversies that were to follow the Irishman through his colourful career, O’Connell allegedly visited the Santander players before the match and attempted to convince them to deliberately underperform in the vital fixture. The unimpressed Santander players refused to comply, but were powerless to prevent Betis from romping to a 5-0 victory which wrapped up the title.

His achievements soon attracted the attention of FC Barcelona, who secured the services of the controversial O’ Connell in the summer of 1935. Catalonia had by this time become a major centre of resistance against the right-wing, nationalistic tendencies personifi ed by General Franco and his Falangist movement. This latent political tension manifested itself on the football pitch in matches between Barcelona and the Franco-sponsored Real Madrid – a fi erce rivalry which persists to this day.

When the Civil War broke out in 1936, Barcelona found itself isolated, threatened on all sides by the escalating violence of the increasingly bloody conflict. When La Liga was suspended, Barca were restricted to playing in a hastily-organised Mediterranean league consisting of clubs from Republican areas of Spain, opposed to the Nationalistic uprising of Franco’s troops. This league was promptly won by Don Patricio’s Barcelona side in 1937.

That summer, with the Civil War at its height and the Catalonian Republican stronghold under threat, O’ Connell accepted an invitation from Mexican athlete Manuel Mas Soriano to tour the United States and Mexico for a fee of $15,000. This was not the fi rst time that fortune had smiled on the Dubliner, and he did not hesitate to grab the opportunity to secure the immediate financial future of the club.

It was also the perfect form of escape from the turmoil enveloping Spain, and a chance to boost the profi le of FC Barcelona abroad. Through a combination of chance and O’Connell’s canny foresight, the club had found a way of securing their future in the midst of one of the darkest periods in Spanish history.

During their Mexican sojourn, Barcelona played friendly matches against Club America, Nacaxa, Atlante FC and a Mexican National XI. The players and manager won instant popularity at all points of their Mexican tour, and travelled north into America bouyed by this positive reception. In New York, they played a series of further friendly matches against Brooklyn Hispano, Brooklyn St. Mary’s Celtic, Jewish Allstars, and an American Soccer League XI, again receiving a rapturous welcome thanks to their talent on the fi eld and their charm and charisma off it, led by the affable Don Patricio.

Having extended their American visit to beyond its original limit by a number of weeks, the team held a meeting to determine what direction to go in. The majority of the club’s players chose to stay in America, with others choosing to go into exile in Mexico and France. When the time came to return to Spain, O’Connell arrived in Catalonia with only  four of the original squad, as well as his coaching staff. The club secretary had already taken the shrewd step of wiring the tour fee of $15,000 to a bank account in Paris rather than take the chance that the cash might fall into the hands of the fascists on their return to Spain.

Having helped to safeguard the future of Barcelona, O’Connell left the club by the end of hostilities in the Civil War, returning to Andalucia to manage Sevilla between 1942 and 1945. He quickly proved himself an effective coach at his new club, leading them to second place in La Liga in his fi rst season. O’Connell’s Spanish adventure eventually came full circle when he accepted the post as manager of Racing Santander for the second time in 1947.

O’Connell brought the curtain down on his illustrious and dramatic career in Spain two years later, returning to England in 1949. Details of his fi nal years remain shrouded in obscurity, but is known that O’Connell lived in poverty near St. Pancras’ Station in London and died there in 1959, aged 71. It was a tragic end to the life of the man from Drumcondra, unbefi tting a sportsman who enjoyed such an illustrious career at all levels of football. However, Barcelona never forgot the importance of his efforts to ensure the survival of their club, and a bust of O’Connell now sits in the Nou Camp’s Hall of Fame. It is a worthy testimony to the achievements of the Dubliner who will forever be remembered in Spain as “Don Patricio”. 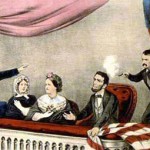 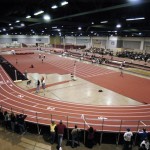