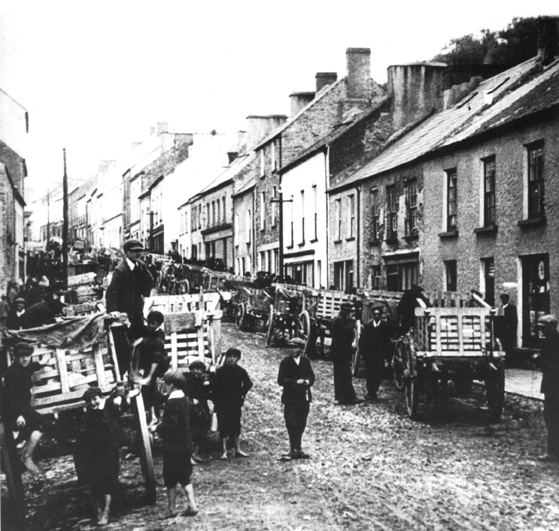 Remembering the colour and the atmosphere of the old countryside fairs, taking Foxford in Mayo as an example.

Long ago, in the pre cattle-mart days, farmers drove their animals on the hoof, along the country roads to the fairs in the local towns. There they haggled and tangled with the brown booted, crombie coated jobbers, in an effort to secure the best possible price for their stock. This cattle drive took place in the very early hours of morning, long before the sun had shown its face above the horizon.

On the evening before the fair, neighbouring farmers gathered their cattle together in a field conveniently located near the main road, so that the herd would be suitably positioned for the start of the journey on the following morning. Alarm clocks were not common in those times, so a number of family members were detailed to stay awake for the night so that the drovers would be roused in good time. These night shift personnel were usually women and while the men slept, the women also fulfilled the task of preparing a hearty breakfast of fried bacon, sausages and eggs, with potato cake, which would be washed down with mugs of strong hot tea. The bacon, as a general rule, was home cured, with liberal amounts of added salt; so many spring wells would be visited in transit to the fair, to quench the dreadful thirst caused by the salty bacon.

A scout rider on a pedal bike was also an important part of the cattle drive. He would ride ahead to stand in the gaps and bye-roads so that the herd stayed on course. This task was usually detailed to a young boy, who was excused school attendance for that special day.

In the town there was the restless heaving, to-ing and fro-ing of the animals. The mooing of alarm as ash-plants beat a tattoo on their steaming backs, as they were urged into position. The jobbers were there with their whiskey-maddened eyes in the midst of the stench and slush, copiously carpeting the streets.

Later in the morning as deals were secured the doors of public houses seemed ready to explode outward from the dint of shouts, hand slapping and laughter within. The visiting street dealers would also be having a hey-day as they sold their wares from stalls, which they set up all over the town. Crockery, second-hand clothes, household tools and goods of all sorts would be selling like hot cakes.

The “Jack Cheaps” would be trying to convince their customers that a jacket was a perfect fit at the front, whilst at the same time grasping a fistful of material from the same jacket behind the customer’s back. On a street corner a man could be seen, selling fish from a box. “Fresh herrins!, fresh herrins!” he’d be crying out. “All alive an’ their eyes open! Pipes in their mouths, an’ they all smokin’,” fibbing, in an effort to advertise the freshness of his fish.

The Gardai, always active on this important business and social event, looked immaculate in their best uniforms, which had been taken out of mothballs for the occasion. There is a silence as Sergeant Peter Walsh walks majestically up the centre of the street, the silver chevrons on his upper arm gleaming in the breaking daylight, thumbs hooked in the buttons of his breast pockets.

“Good morning Sergeant” someone ventures, as an acknowledgement of respect for his authority. “Good mornin’” the tall Sergeant responds in his west Galway accent. Everyone knows that this limb of the law will not tolerate any nonsense or improper behaviour and that cases are usually dealt with at local level. No need to waste the time of the courts. (In later years Sergeant Walsh’s grandson, Kevin O’Neill, would kick accurate points for his club, Knockmore, as well as for his county, wearing the green and red of the Mayo senior football team and winning an All-Ireland “All-Star” award.)

Soon the Sergeant could be seen climbing the creel of a cattle truck as he inspected the contents. Descending, he is seeking the owner of the vehicle and finding him, he warns that there is a beast “down” inside the truck. The notebook is out and the finger is wagging. “Yes Sergeant; no Sergeant”, the apologetic cattle truck owner is responding, as he opens the ramp of his lorry to rescue the beast from a potential life-threatening situation.

The Protection of Animals Act, 1911 is being rigorously enforced and Gardai are on the lookout for any form of cruelty in evidence at the fair. Section One of the act states: “If any person shall convey or carry, or cause or procure, or being the owner, permit to be conveyed or carried, any animal in such a manner or situation as to cause that animal any unnecessary suffering.” Or “Allowing a cow to be overstocked with milk when she was sent to market and so causing her to suffer pain is an offence under Section 1; Waters v Braithwaite (1913).

Local historian and folklorist, my older brother Mick, tells me that it was common practice for cows to be left un-milked for a couple of days before they were offered for sale. He knows of one man (considered a crook), long since gone to his eternal reward, who deliberately blocked the cow’s teats with artificial stoppers so that the pressure of milk would swell the cow’s udder and prevent leakage. Dipping grains of rye in cycle-repair rubber solution, and forcing these stoppers into the opening of the cow’s teats had this desired effect.

This action was not in itself painful, but when the beast was left un-milked for a couple of days, with her teats blocked, she would have the appearance of having a gigantic udder stocked full of milk, but she would also be in severe pain from the increased pressure. A prospective buyer would be invited to do a “test” milking and the first squeeze of a teat would dislodge the stopper and the resultant jet of milk would gush forth, boring a crater in the gravel surface of the street. The unsuspecting buyer would think that he had tested an exceptional milker, and immediately pay the asking price. Next morning, sitting on a milking stool with a white enamel bucket between his knees, the new owner would anticipate the music of milking, but instead, would pull and drag for a very long time to get a very small yield. “God bless the cows” he would very likely say; dipping his thumb in the new milk to make the sign of the cross on the cow’s hip; “but to hell with the crook who sold me this old stripper”.

The battery wireless had just arrived in the district and Brendan Jones had a PYE model tuned in to Athlone, set up outside his shop. A crowd of country folk, celebrating their new wealth from the sale of stock, was gathered ‘round and ready to place a deposit on one of those wonderful wooden boxes that produced such rhythmic music and song. (As a small boy I thought that all those little people inside the wireless lived in a Lilliput town called Athlone). On Jones’s exhibited radio I heard a lovely male singer proclaim that “There’s a pawnshop on a corner in Pittsburgh Pennsylvania an’ I aint got a thing left to hock”. I think his name was Guy Mitchell.

Those days are past now. Gone are the tanglers and the drovers; gone are the brown-booted dealers in their Crombie overcoats. Gone too the street traders and fish sellers, an entire way of life gone forever. There are no cattle in those streets anymore. They are traded in marts like any other commodity and there are only a few of us who can remember the Fair Day as it was back then in all its glory.

In loving memory of those times I wrote a few verses as follows in which I endeavour to convey the perspective of a young schoolboy riding an adult sized pedal cycle, attending the fair of Foxford over 50 years ago. This following poem was published by Frank Hall in his column in “Ireland’s Own” some years ago and as a result I received a very nice complementary letter from Brendan Kenelly, (the famous Poet) on Trinity College headed paper, where he is/was professor of English. 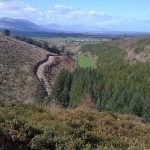 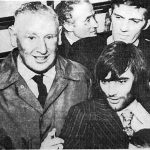