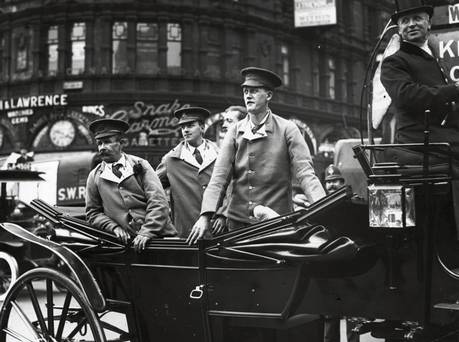 Sir Arthur Conan Doyle – “No writer in fiction would dare to fasten such an achievement on any of his characters, but the Irish have always had a reputation of being wonderful fighters, and Lance-Corporal Michael O’Leary is clearly one of them”.

Without doubt one of the most popular V.C. heroes of the war was Sergeant (later Lieutenant) O’Leary, of the Irish Guards. His great exploits at Cuinchy in Northern France stirred people’s imaginations as few others have. O’Leary became the most talked-of soldier in the world when the story of his great deeds were made known.

Poems were written about him, newspaper articles were dedicated to him, and he received an ovation in London such as kings might envy. These tributes, however, were no more than the brave Irish Guardsman deserved, for with his unaided strong right arm he captured an enemy position, and of ten Germans who stood in his path he killed eight and took the remaining two prisoners.

“His prowess at the Cuinchy barricades,” says a writer, “has put the deeds of the Three Musketeers in the shade, for in comparison to O’Leary they are drawing-room heroes.” There is a story told of O’Leary’s childhood that is worth relating. In the mid 1890s a little fair-haired Irish lad was playing outside a neat, comfortable-looking cottage in Macroom, about forty miles from the city of Cork. He was charging imaginary foes, stick in hand, with so much vigour that the plump hens scuttled to cover, and entrenched themselves.

His mother came to the door of the cottage: An’ what is it ye are doin’ now, Mike? she asked, with a smile. And the curly-haired youngster replied: “I’m a soldier.” Twenty years later the same mother stood outside the same cottage door in Macroom listening to the almost unbelievable story of a messenger who had dashed from Cork city by motor-car.

Her son—her Mike—had gained the Victoria Cross. As she heard of how he had killed eight Germans and taken two trenches unaided at Cuinchy, of how the world was ringing with the immortal exploits of Sergeant Michael O’Leary, V.C., the brave woman nearly broke down.

“Glory be to God! May He preserve my brave boy!” was all she could gasp. The hero’s father, a man well over six feet and of powerful frame, was also strongly moved. His words, also, were few: “I wish I was by him, it must have been a beautiful sight.”

To say that O’Leary had an interesting career would be an understatement. He was born at Macroom in September 1890. Before becoming a soldier he served the British Empire as a bluejacket, being attached to H.M.S. Vivid. Then the Army called him, and he promptly enlisted in the Irish Guards at the age of twenty.

He had not long been an inmate of Caterham Barracks, where he proceeded for his early military training, before he earned the respect of his comrades. The incident, vouched for by a drill-instructor at Caterham, gives an insight into his temperament.

Some of the rougher element among the Coldstream Guards were skylarking, and a mere youngster was being very unfairly tormented. O’Leary was present, and his blood boiled to see the lad so roughly handled. His interference led to ‘a scrap’ with the ring-leader, who got a well-deserved thrashing. When the fight was over O’Leary shook hands with his opponent and invited him to coffee in the canteen.

From that moment he became very popular, not only with his own comrades, but with the Coldstreams. He is still remembered at the depot for his sunny disposition, his Irish-isms, and his entertaining, rollicking manner. He was often heard singing: Mickey was a soldier bold, Mickey died to save the colours.

After serving his three years with the Irish Guards, O’Leary went into the Reserve. For a time he helped to tend his father’s stock on the little farm in Co. Cork; later he proceeded to Canada and served with the North-West Mounted Police.

He had served in this force about twelve months when war broke out, and was one of thousands of Reservists who rushed to rejoin the Colours in August 1914. When O’Leary was sent to the front in November 1914 the military situation was a difficult one.

All around the La Bassée district fierce fighting had raged since October. The 1st Battalion of the Irish Guards, in common with other regiments, now experienced the severities of the trench warfare. At the end of January they were stationed near the La Bassée brickfield, and the Germans were subjecting them to a withering fire.

Notwithstanding that they had excellent cover, both in trenches and behind stacks of bricks, the bombs thrown by the mortars cost them dearly.On the last night of January the enemy’s fire was particularly hot, and it was decided that the trenches were too expensive to hold. 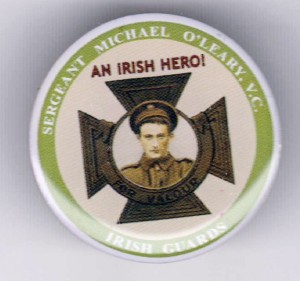 But before evacuating them O’Leary’s unit were ordered to storm the enemy’s position. This took place on the morning of the first of February, and one can well imagine how welcome the historic command, “Up Guards and at ’em,” must have been to an adventurous and bold soldier like Michael O’Leary.

In order to prepare the way for the assault the artillery division commenced one of the fiercest bombardments of the war up till then—nothing to be compared with the later sustained cannonades at Neuve Chapelle and Loos—but nevertheless very powerful.

It is said that the boom of the big pieces of artillery and the detonation of their shells were audible twenty miles away. Our guns fired at the brickfield with such terrific intensity in order to demolish what had become a regular bastion in the German lines, also to break down the barbed wire entanglements in front of the German trenches, and to thoroughly demoralize the enemy before our men stormed the positions.

No. 2 Company of the Irish Guards was ordered to keep up a sustained rifle-fire. This was to make the Germans keep under cover, no matter how much they wished to escape from the barrage of artillery fire. The diversion also caused the enemy to expect an attack from this direction, with the result that he concentrated his fire on the trench occupied by No. 2 Company. Then No. 1, O’Leary’s Company, which was on the left of No. 2 Company’s trench, was ordered to charge.

The Irish dashed over the parapet with a yell, their bayonets fixed, and rushed at the enemy in fine style. The distance they had to cover to reach the German positions was from 100 to 150 yards. The men were very eager to be at the enemy after their long spell in the trenches, and went for their foe at racing speed.

O ‘Leary soon outstripped his comrades and sprinted at the enemy. “You would laugh if you saw us chasing the Huns and mowing them down,” he wrote to his parents. He rushed on like one possessed, never looking behind to see if his comrades were following.

A railway bank rose in front of him. He cleared it, and went on. There was long ago a famous outlawed chieftain of Muskerry, Art O’Leary by name, from whom he is doubtless descended, and Mike O’Leary must have inherited some of the outlaw’s wild spirit as heedless of risks, he dashed toward a strong barricade held by the Germans.

O’Leary paused at a little mound and looked around. In front of him was a deadly machine-gun, trained on the trench occupied by the second company of Irish Guards.As already explained, their work was to deceive the enemy and the manoeuvre had proved successful.

Their rifle-fire had prevented the Germans from showing their faces, and they had not seen that the British were racing toward them. When O’Leary reached the mound the Germans became aware of their danger and immediately prepared to turn the machine-gun upon the advancing First company. It was a critical moment in O’Leary’s life.

On his coolness and bravery depended not only his own life, but also the fate of his comrades. Another moment and the deadly stream of lead would be directed full upon them. O’Leary did not hesitate; he took deliberate aim with his rifle at the gun’s crew, five in number, and one by one they dropped as his unerring finger pressed the trigger.

His bold move in a supremely dangerous situation had been successful. The machine-gun was his. The lives of his comrades were safe. For an ordinary man this marvelously brave deed would have sufficed. But O’Leary was no ordinary hero. The exploit he had just performed whetted his appetite for more.

Another barricade farther on had caught his eye. With amazing audacity and dare-devilry he bounded toward it. The Germans there had seen O’Leary’s daring exploit, and were prepared for him. As before, the young Irishman remained calm and collected. Aiming deliberately he got his blows in first, and killed three more Germans.

The two remaining had no stomach for the charging Irishman. They promptly raised their hands, and O’Leary at once went forward and secured them as his prisoners. O’Leary confessed afterward that his second great exploit was a hazardous one. He had no bayonet at the time and had to trust solely in his marksmanship.

His rifle was loaded with ten rounds, and eight of the bullets found a human target. When the last two Germans surrendered he had no ammunition left, and had they not been demoralized by his sudden and audacious attack single-handed, the issue would have been different.

To sum up, Sergeant O’Leary, by his superb daring and amazing skill in shooting, had killed eight Germans, captured a machine-gun, taken two Germans prisoner, and carried two strong positions, from which the rest of the attacking party would have been heavily fired upon.

Someone has said that this exploit was thoroughly Irish in method and execution, and that O’Leary deserves to rank as one of the greatest heroes of modern warfare. Describing what happened afterward, Company-Quartermaster-Sergeant J. G. Lowry, of the Irish Guards, says:

“O’Leary came back from his killing as cool as if he had been for a walk in the park, accompanied by two prisoners he had taken. He probably saved the lives of the whole company. Had that machine-gun got slewed round, No. 1 Company might have been nearly wiped out. We all quickly appreciated the value of O’Leary’s sprinting and crack shooting, and when we were relieved that night, dog-tired as we were, O’Leary had his arm nearly shaken off by his comrades.”

When on furlough O’Leary was feted and cheered as no V.C. hero has been. He received a splendid welcome in Cork and in his native village. The greatest day in his life, however, was June 26, 1915, when Londoners turned out in tens of thousands to acclaim him in the streets. To honour him the London Irish organized a demonstration in Hyde Park, at which over 60,000 persons were present. O’Leary drove from the Strand to the Park in an open carriage, cheered all along the route by thousands of admirers.

In due course he proceeded to Buckingham Palace to receive his V.C. from the King, and he was honoured by the presence at the ceremony of the Queen, Princess Mary, Queen Alexandra, and Princess Victoria. After his Majesty had shaken hands with the hero of Cuinchy, the other members of the Royal Family did likewise. O’Leary left the Palace a proud man, though he afterward protested that he “didn’t know what all this fuss was about.”

In addition to receiving the V.C., O’Leary was given a commission in the Connaught Rangers. He is one of the very few British soldiers who have been decorated by the Czar of Russia for conspicuous bravery, and, in addition to the V.C., wears on his breast the Russian equivalent—the 3rd Order of St George. 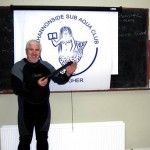 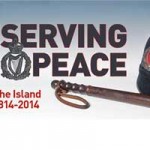 200 Years Of Policing In Ireland- A New Exhibition