The 69th ‘Fighting Irish’ Regiment in the First World War 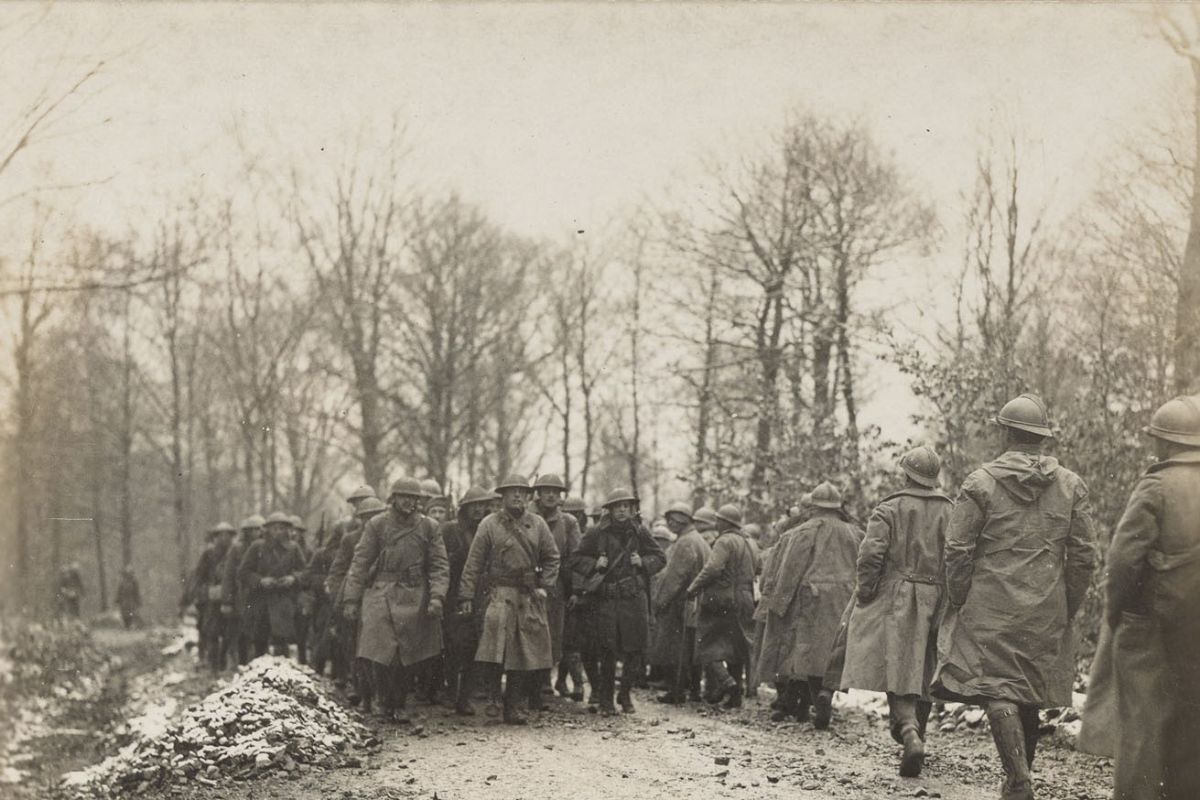 The United States of America entered the war on 6 April 1917, and by the summer of 1918 over two million American soldiers had landed in Europe.

The 69th Regiment, whose regimental motto was ‘Gentle When Stroked, Fierce When Provoked’ and who had earned the nickname the ‘Fighting Irish’ during the American Civil War (1861–5), was a National Guard (Reserve Army) unit.

For the First World War the regiment enlisted 3,600 men, organised into three battalions. A recruiting campaign started with posters like this one, encouraging Irish men to join, and 95% of the regiment were Irish and Roman Catholic. Among the well-known members of the regiment was Father Duffy, its revered chaplain, and a stature of him was erected in Times Square in his honour when he died in 1932. Its most famous officer was Lt. Col. ‘Wild Bill’ Donovan, a lawyer from Buffalo who later created the Office of Strategic Services (OSS)—the precursor to the CIA—during the Second World War.

Finally there was Sgt Joyce Kilmer, then America’s most popular poet, who was killed by a sniper on 30 July 1918 while serving in the Regiment. Their wartime experiences were later portrayed in the 1940 film The Fighting 69th, starring James Cagney.

The 69th Regiment was part of the 42nd (Rainbow) Division, which consisted of the best units of the National Guard and was for a time commanded by General Douglas MacArthur. The regiment went into action on 27 February 1918, fighting alongside the French Army, and took part in fierce fighting as the war drew to a close through seven battles, losing 644 men. In December 1918 the 69th became part of the army of occupation based in Remagen, and arrived back in New York on 21 April 1919, parading through the city.

Colonel Donovan won the Medal of Honour, as did two other members of the 69th Regiment. Instituted in 1862, the medal is awarded to members of the US armed forces who have distinguished themselves ‘conspicuously by gallantry and intrepidity at the risk of his life above and beyond duty while engaged in an action against an enemy’.

The most famous Irish-American winner of the medal was Daniel Joseph Daly, a US Marine born in Glen Cove, New York. He is best remembered for his famous battle-cry at the attack on Belleau Wood in June 1918, when he moved his unit forward in the face of the withering German machine-gun fire, shouting ‘Come on … Do you want to live forever?’.

He was denied his third medal, however, having already won two, one in China in 1915 and one in Haiti in 1915.