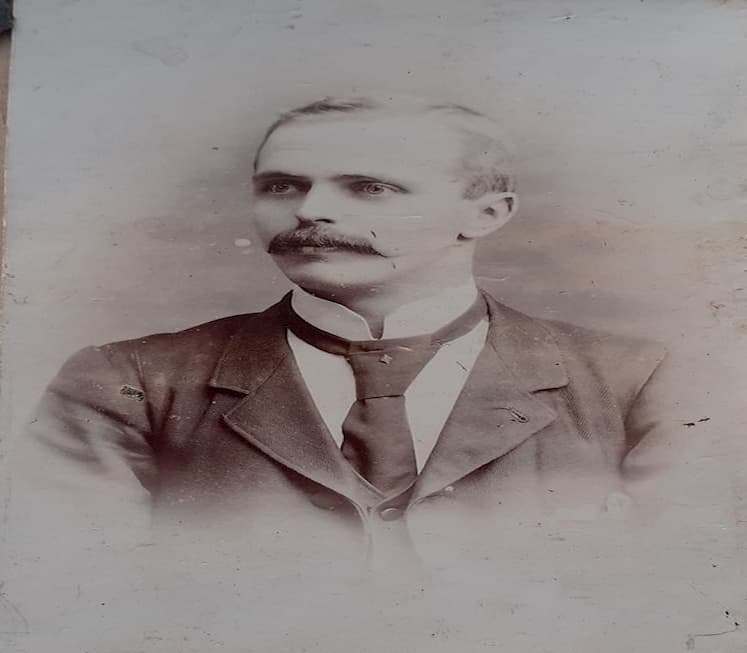 This is my grandfather, John McDermott.  He was born in Tulsk, Co. Roscommon, in March 1877, son of Patrick and Bridget McDermott.  When he was almost twenty, his brother got married and John met his new sister-in-law’s 15-year-old sister at the wedding. Supposedly he made up his mind then that Delia Nolan would one day be his wife, but he had to wait another nine years before Delia finally was in agreement on the matter.

In the meantime, he went to work in Whitecross, Co. Armagh, where he managed a new creamery.  When he married Delia in June 1906 he was also running the post office in Whitecross.  His career was fostered by the benevolence of a man called Sam Young and he prospered in Whitecross for many years.

Unlike the Covid-19 outbreak.. the Spanish ‘flu claimed its victims mainly from healthy young adults.

The pandemic known as the Spanish ‘flu arrived in Ireland in the early summer of 1918.  Unlike the Covid-19 outbreak currently visited upon us, the Spanish ‘flu claimed its victims mainly from healthy young adults.  It lingered in Ireland, dying away and returning.  My mother was born in Whitecross in January 1919.  She was John and Delia’s ninth child.  About the time of her birth, her father was struck down by influenza.  He was just short of 42 years old at the time.  He became seriously ill.  They had all but given up hope for his survival.  His mother-in-law, Honora (Noney) Nolan, my great-grandmother, arrived from Athenry, Co. Galway, to visit.  Supposedly disregarding the doctor’s orders, she fed him whiskey: he survived.

He survived and he lived another forty years.  Unfortunately, there was a victim within the McDermott family whose life was claimed by the pandemic.  His youngest brother, Luke McDermott, was a Royal Irish Constabulary policeman stationed in Kilcummin, Co. Mayo.  In March 1919 he succumbed to the ‘flu and was taken to the Castlebar Union hospital.  He died on 24 March aged 34.  The certified causes of death were ‘Influenza 9 Days Septic Pneumonia & Meningitis’.

My grandfather, John McDermott, and I were in the world together for nearly four months but I don’t know that we ever met.  He died in Sutton, Co. Dublin, in December 1959, a survivor of a pandemic that claimed upwards of 50,000,000 lives worldwide.

Paul Gorry has had a lifelong interest in local and family history, dabbling in both by the age of ten. Paul began his career as a freelance researcher for the Genealogical Office (GO). Since 1987 he has been researching entirely through the firm of Gorry Research.

He was a founder member of Accredited Genealogists Ireland. He served as AGI’s Hon. Secretary in 1988-1991 and President in 2007-2009. In 1989 he brought together a group of individuals to organise an international conference on Irish genealogy. This group staged the 1st Irish Genealogical Congress (IGC) in 1991. It was followed by three further IGCs, held in 1994, 1997 and 2001. Paul was Chairman of the IGC from its inception to 2002.

Paul has written five books on genealogy and local history. He is a Fellow of the Society of Genealogists (London) and the Irish Genealogical Research Society. This article first appeared online as AGI’s Image of the Month.

More information on Paul can be found here