80% of people are satisfied with the service provided by An Garda Síochána to local communities, according to the most recent Garda Public Attitudes Survey (3 rd Quarter 2018), with 91% saying the public have faith in the force.

However, in a sign of the work still to be done, over one third of respondents (37%) said that community relations with the police were poor and 43% said that the Gardaí are not dealing with the things that matter to people in the local community.

However, the vast majority of people – 60% – say that fear of crime has no impact on their quality of life. This has, however, been decreasing over recent survey sweeps. The number of people reporting their crime to Gardaí was at 76%. The proportion of victims reporting that they felt the right amount of information had been provided to them stood at 37%.

The majority of respondents had positive views about the capability of An Garda Síochána to be friendly and helpful (92%), community focused (74%), modern or progressive (69%), effective in tackling crime (66%) and well managed (54%). Forty-five per cent of respondents said the organisation provides a 'world class' police service.

Deputy Commissioner, Policing & Security, John Twomey said: “The latest results from the Public Attitudes Survey contain many positives such as a reduction in the number of victims of crime,
continuing high levels of trust in An Garda Síochána, and satisfaction with the service we provide to communities.

These are all important measures for us in ensuring we provide a policing and security service that protects and supports communities. It is clear from the survey that more work needs to be done in areas such as meeting the needs of local communities and ensuring victims are kept well informed. We will make improvements in those important areas.” 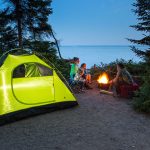 Trouble getting to sleep? Study finds a weekend camping trip can help