The Garda Band: A National Institution 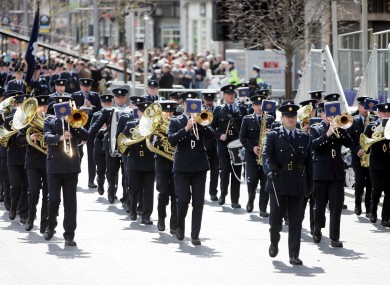 It is remarkable to think that, barring a hiatus between 1965 and 1972, the Garda Band is almost as old as An Garda Síochána itself. It was established by the very first Garda Commissioner, Michael Staines, in September, 1922. Lead by bandmaster Superintendent D.J. Delaney, the Garda Band had its first public performance on Dun Laoghaire pier on Easter Monday of 1923, the same year that the force first became known as An Garda Síochána. The Band gradually formed a céile band, pipe band, and dance orchestra, and quickly established itself as a national fixture. In 1938, the Dublin Metropolitan Garda Band amalgamated with the Garda Band, and the new band found its permanent home at the Depot in Phoenix Park.

Today, the Garda Band is a national institution, instantly recognised by the public for its performances at soccer and rugby internationals at Lansdowne Road, and its annual appearance at the ever popular Rose of Tralee Festival. In 1965, however, the Garda Band was disbanded, in order to free-up resources to provide a promised addition of 20 new squad cars to the force. Ironically, the disbanding followed a particularly triumphant and exciting year for the Band. In 1964, as part of a gala group of entertainers which also included the Tara Boys Band and the O’Connell Girl Pipers, the Garda Band took part in a whirlwind two month tour of the US and Canada. Although they may not have experienced quite the same levels of adulation enjoyed by the Beatles and the Rolling Stones, the “Ireland on Parade” tour rode the crest of a wave of excitement and glamour surrounding the Irish in America, and saw the Band play five nights in Madison Square Garden.

The Ireland on Parade tour was the brainchild of Fred O’Donovan, a Fairview-born theatre producer whose remarkable career brought him into contact with Sean O’Casey, George Bernard Shaw, Peter O’ Toole, Bing Crosby and many other luminaries and legends. O’Donovan worked for the Royal Airforce in the late 40s, and caught the showbiz bug after putting on shows to entertain military audiences. Back in Ireland, he began his illustrious career as an assistant stage manager, eventually befriending Sean O’Casey over the telephone during a 1955 production of The Bishop’s Bonfire. Gradually working in theatre, radio and television, O’Donovan was a keen promoter of Irish talent. When the Ed Sullivan Show rolled into Ireland, O’Donovan agreed to produce it, on condition that it featured Irish artists like Maureen Potter.

O’Donovan’s idea to bring an Irish showcase tour to the States in ’64 was a canny one. The Kennedy presidency, though it had ended tragically the year previous, was an indicator of the prestige and success which the Irish were enjoying in America in the early sixties. Culturally, the Clancy Brothers and Tommy Makem had placed Irish folk music at the centre of the American folk revival in Greenwich Village, befriending and influencing a young Bob Dylan, who famously borrowed the air of their rendition of The Patriot Game for his anti-war ballad With God on Our Side.

It was in this context that O’Donovan’s Ireland on Parade tour took flight: a period when post-war optimism was at its height in the States, and the Irish there were enjoying tremendous success economically, and cultivating a considerable romantic glamour in cultural terms. Back in Ireland, Fred O’Donovan had partnered with famed broadcaster Eamonn Andrews to establish the media company Eamonn Andrews Studios, which ran a dance hall (The Television Club) on Harcourt St and a recording studio on Henry St. It was in this Henry Street studio that the Ireland on Parade touring group, including singers Mary Sheridan, Patrick O’Hagan, and Bill McMahon, took shape. Then Minister for Justice Charles J Haughey had authorized the use of the Garda Band, and in March 1964, Garda Matt Cosgrave was chosen as the drum major and band leader, largely because, at 6ft 6in, he was the tallest man on the force at that time.

In September, the 100 strong touring group finally departed for New York. The tour was a fantastic success. Their first performance was at the New York World Fair, an event remembered by many Americans as a final expression of uncomplicated optimism before the Vietnam War and various social tensions changed the American landscape in second half of the decade. Playing a traditional repertoire which included ‘Ireland Boys Hurrah’, ‘Danny Boy’, and ‘When Irish are Smiling’, the touring group was rapturously received across the U.S., and was even granted a guided tour of the White House by President Lyndon Johnson’s daughter. In Madison Square Gardens, they played to crowds above the venue’s 15,000 capacity, with one night’s attendance estimated at 19,000. Shuttling from city to city on Greyhound buses, they played 37 major cities before their final return to Ireland on the 13th of November, 1964. It must have been a strange homecoming after such a whirlwind adventure.

After such excitement, 1965 was the most disappointing year in the long life of the Garda Band. In November, it was announced by Brian Lenihan, Haughey’s replacement, that the Band would be no more, despite the huge disappointment of the musicians and dismay of the public. This situation remained for the next seven years. However, in 1969, an enquiry into pay and conditions in An Garda Síochána, the Conroy Commission, was established. Following a compelling submission from John Carney and fifth Garda Bandmaster John King, the Conroy Commission recommended the re-establishment of the Garda Band. Finally, in February 1972, during celebrations for the 50th anniversary of An Garda Síochána, Justice Minister Dessie O’Malley officially announced the return of the Garda Band. Its first new bandmaster was Sergeant Tommy Boyle, whose innovative and popularising style brought the Band from strength to strength in the ensuing years.

Today, it remains a superb PR wing of an Garda, warmly regarded by the public and instantly associated with memories of Lansdowne Road, St. Patrick’s Day, and the Rose of Tralee Festival. It’s rich history, as we have seen, is closely linked with the establishment of the Irish State and its national police force, and once even took its place in a vital and exciting period of American history, a moment of unique optimism for Irish Americans in particular. 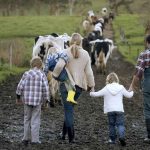 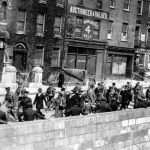 A Bitter Memory: The Deaths of RIC & DMP Officers During Easter Week 1916