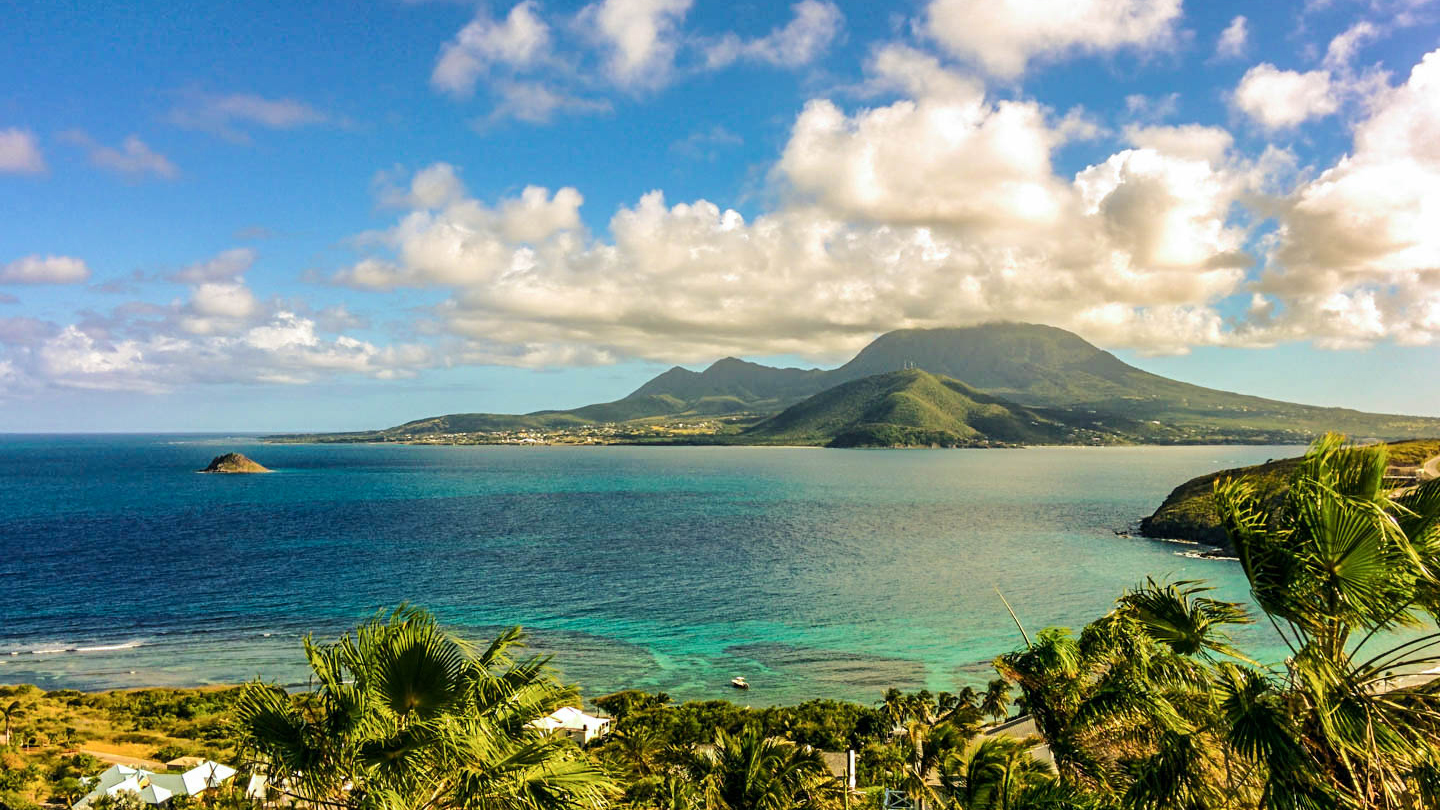 For a change, here is part two, in a list of less popular, but definitely worth visiting, destinations.

Once a site of conflict and unrest, Medellín has cleaned up its act in recent years. It is filled with amazing culture, beautiful street art, and unreal nightlife. Tasty street food can be found throughout the city as well. For thrill seekers, Medellín is also building a reputation as a major hub for paragliding. 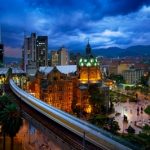 Medellín packs the punch of a city twice its size. Situated in a narrow valley, the city’s skyline reaches for the heavens, setting high-rise apartment and office buildings against a backdrop of jagged peaks in every direction. Its pleasant climate gives the city its nickname – the City of Eternal Spring – and the moderate temperatures put a spring in the locals’ steps, at work and at play.

The city sprawls north and south along the valley floor. Slums hug the upper reaches of the hills. True to its paisa (people of Antioquia) roots, Medellín affects an indifference to the rest of Colombia, and puts on metropolitan airs – the traffic officers wear Italian-style round, boxy hats; many discos prefer techno or reggaeton to salsa and vallenato.

Visit Pueblito Paisa, a reconstruction of a typical but tiny Antioquia village. It’s located on top of el Cerro Nutibara and has a pleasant view of the city. It’s within walking distance of the metro station “Industriales,” but as the walk to the top requires hiking uphill for a while, visitors might find that a taxi ride is a smart choice.

Los Alumbrados, the Christmas lights decorating Medellin, make it the most beautiful Latin American city for the holidays. The lights stay up from November 30, 2016 to mid-January 2017. The most impressive parts are will be around Calle Carabobo north, other important avenues of the downtown and cerro Nutibara. Large statues made of lights can be found throughout the city.

The Metropolitan Cathedral, which holds the record as one of the buildings in the world with the most bricks – over 1.1 million – is located next to Bolivar Park in the city center.

The Azores is one of the two autonomous regions of Portugal, an archipelago composed of nine volcanic islands in the North Atlantic Ocean about 1,360km west of continental Portugal. It is a group of nine islands in the middle of the Atlantic Ocean, which blend an island lifestyle and climate with European charm, language, and architecture. The vegetation, views and nature in general are simply breathtaking.

Visit the Lagoa das Sete Cidades, a beautiful hour glass green and blue body of water northwest of Ponta Delgada. The locals tell many stories, myths and legends about this lake. Or the Lagoa das Furnas, a lake with steam vents, mud pots and geysers, where locals cook food in earth ovens available in picnic areas. 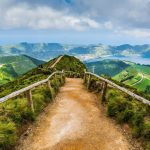 On Pico Island you can climb the mountain, 2351 meters above sea level. It is the tallest mountain in Portugal. Ideally you climb the mountain in the afternoon so you can see the sundown when you are in the top. The hike to the summit usually takes about 2 to 3 hours.
If you feel like visiting Terceira Island, make sure to see UNESCO’s Angra do Heroismo, a charming XVIII century little city full of shops, cafes and bars. Terceira is inherently the happiest Island, and special events occur all year long. Get a tour around the island, visit a volcano (Algar do Carvão), a cave (Gruta do Natal) or walk through any of the dozens Trilhos (official hiking trails.

What all the islands have in common is their excellent local cuisine. Fresh fish is available every day and another speciality is the local grass fed beef. There is a “meat and potatoes” mentality when it comes to the cuisine and vegetables can sometimes be hard to come by. Sao Jorge is famous for its cheese and must be tried. Fresh pineapple from Sao Miguel is also unbelievably good. 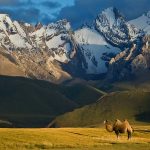 Kyrgyzstan is a South-Central Asian Union country of incredible natural beauty and proud nomadic traditions. Landlocked and mountainous, it borders Kazakhstan to the north, Uzbekistan to the west, Tajikistan to the southwest and China to the southeast. Annexed by Russia in 1876, it achieved independence from the Soviet Union in 1991. It has the most liberal tourist visa policy in Central Asia and one of the more progressive post-Soviet governments in the region.

In summer, the alpine peaks and valleys turn into an intrepid playground for mountain biking, rafting, horse riding and trekking, allowing people to travel for days or even weeks on incredible expeditions. When it snows the mountains open up for all imaginable winter sports.

Travellers can immerse themselves in the unique nomadic culture, doing traditional yurt stays and learning all about the hospitable Kyrgyz people. Wander around Osh Bazaar – a traditional Eastern market in Bishkek selling everything from spices to dishwashers. Or buy cheap Chinese goods in Dordoi Bazaar – The largest market in Central Asia, situated 20 minutes north of Bishkek.

Swim, sail and sunbathe in Issyk Kul – The world’s second biggest high altitude Mountain Lake, or hike or climb in Altyn Arashan, a secluded valley a two hour jeep ride from Karakol. For another kind of adventure try a three day horseback riding tour near the Toktogul.

Nevis is a Caribbean destination that few people can pinpoint on a map, but it boasts a unique island charm that sets it apart from its more frequented neighbours. Unspoilt, relaxed and easygoing, Nevis has wide open spaces and a rich cultural heritage that implore visitors to ditch the clichéd holiday itinerary of all-inclusive sea, sand and sun, and instead immerse themselves in the natural world.

There’s nothing brash about this sweet and unhurried island, whose blissfully uncrowded beaches fringe a forested interior that rises to majestic, often cloud-shrouded, Mt Nevis (3182ft). The coastal lowlands support bougainvillea, hibiscus and other flowering bushes that attract numerous hummingbirds. It’s this lush landscape that makes Nevis so popular with bikers, hikers, birders and other nature and outdoor fans. History buffs, meanwhile, can snoop around the legacy of Horatio Nelson and Alexander Hamilton.

Everything from hiking and cycling to sailing, scuba diving and windsurfing can be enjoyed here year-round. 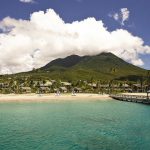 Most visitors arrive by sea, crossing the two-mile Narrows that separates Nevis from its mountainous sister island, St Kitts, which is also worth some of your time. Where you stay is largely a choice between beach or hills − Nevis has several characterful plantation-style hotels that you should at least visit for lunch, afternoon tea or dinner if you do not check in.

The capital, Charlestown, is a small, friendly affair dotted with Georgian buildings and 19th-century churches, and there are enjoyable days to be had seeking out the island’s old sugar estates and walking or riding in the forests inland. Other diversions include a top class golf course, mountain biking, diving and some good Caribbean restaurants.

For most travellers, though, it is the atmosphere on Nevis that is most compelling. Safe, friendly and welcoming, this is an island where there are no all-inclusive resorts, or visits from cruise ships with 2,000-plus passengers to disgorge. Fanned by trade winds, the climate is exceptionally inviting, and for once the hotels aren’t all crammed together on the beach. All come with large and luxuriant gardens, or groves of lofty coconut palms, while inland the hills are a fiesta of mango and flamboyant trees. On Nevis, the romance of the Caribbean still rings true. 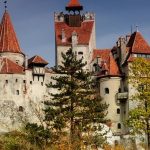 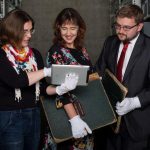