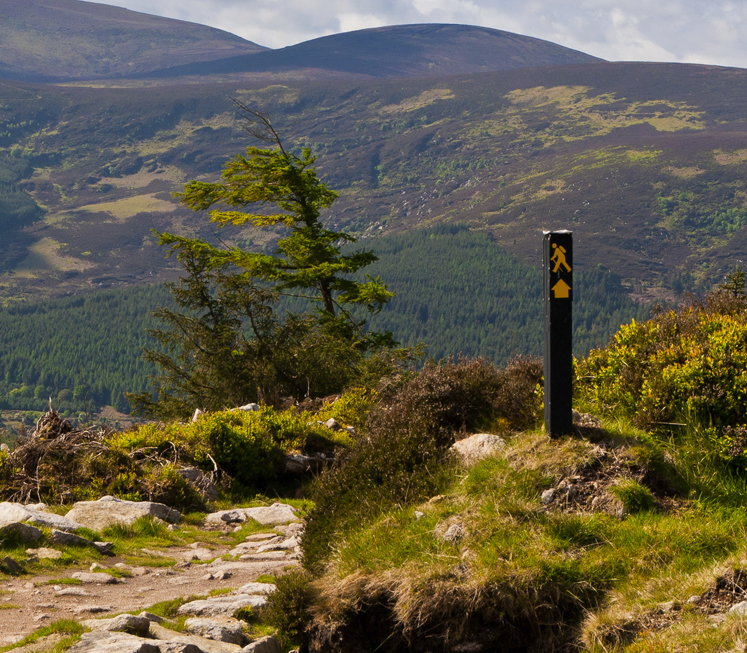 Traditionally the Wicklow Way is walked from north to south, beginning at Marlay Park in south Dublin and ending in Clonegal, Co. Carlow.

Although our description outlines the route in this direction, south to north has the advantage of a couple of days getting leg muscles loosened up on the low-level terrain before heading into the more taxing mountain region.

Marlay Park is on Grange Road and is served by Dublin Bus route No.16 from Santry through Dublin city centre (O’Connell Street). A bus stop is conveniently located almost opposite the Park entrance gate.

If planning to begin at Clonegal and walk to Dublin, then the Bus Eireann Expressway service from the Dublin city-centre bus station (Busáras) at Store Street to Waterford will leave you at the village of Kildavin, just 3km from Clonegal. Alternatively, continue to the larger town of Bunclody (Clonegal 5km) to make final preparations and purchases.

The Wicklow Way begins at the car park adjacent to Marlay House, with its courtyard of interesting craft workshops and a pleasant little coffee shop. The trail wanders through the delightful sylvan surroundings of this fine suburban public park, before tunnelling under the M50 motorway to begin the walk’s first ascent southwards towards the Dublin hills and the first of several forest vistas (this one predominantly of communication masts!).

Passing Kilmashogue, Fairy Castle (536m), Two Rock and Tibradden mountains the trail descends to reach the Glencullen road at Ballybrack after 9 km. Walking eastwards along the road, the route then turns south (A diversion of 2km eastwards will take the weak-willed to Johnny Fox’s world-famous pub and also an occasional bus service back to the city!) to cross the Glencullen River. The hike then begins the ascent towards Prince William’s Seat (555m) followed by a zigzag descent to the Enniskerry road at about 17km, directly north of Knockree Hill.

There are three options for accommodation close to the trail at Knockree. Those wishing to explore a little off-trail can visit the picturesque village of Enniskerry, which is 4km to the east. Visitor attractions here include Powerscourt House and Gardens.

The Wicklow Way skirts round to the west of Knockree Hill, descends to cross the Glencree River valley and reaches Crone Wood car park at 22km. From here a steady up hill walk brings the trail via a spectacular viewing point over Powerscourt Waterfall and Deer Park (the imported Japanese Sika deer have long since escaped and inter-bred with the native red deer population of the surrounding uplands).

Soon, trekking into open country, the Dargle is the next river to be crossed, followed by a climb to 650m around the east shoulder of Djouce (pronounced jowsse) (775m). Adjacent to here is a site that’s become part of modern folklore after a Plane Crashed on Djouce Mountain in 1946. From here, the trail goes on to White Hill and at around 31km a raised walkway (installed to protect the fragile surrounding blanket bog from further serious erosion) marks the start of a long descent through Ballinastoe Woods, opening to reveal the wonderful vista of Lough Tay and the Luggala (pronounced lug-a-law) valley, to reach the Roundwood to Sally Gap road at 32km.

A 2km road walk giving fine views high above the valley is followed by a further 5km through the forest at Ballinrush and Ballinafunshoge. This leads to a road at 38km from where a 2km hike, firstly north, then east, leads to Roundwood which has good shops and pubs as well as accommodation.

Alternatively, continue southwards on the trail for a further 3km to Oldbridge.

Following the first two stages of the Wicklow Way at around 20km each, stage three comes as a pleasant contrast with the trail being just 10-12km long. This will allow some time for exploring the very heart of the Wicklow uplands located at the junction of four major glacial valleys (Avonmore, Glenmacnass, Glendasan and Glendalough) at Laragh (pronounced la-ra) and Glendalough (pronounced glen-da-lock). This area has much to offer both scenically and historically and those who can spare an extra day to explore it will be richly rewarded.

Beginning at Roundwood, regain the Wicklow Way just north of Oldbridge. Continue hiking on the public road for a further 3km over Drumray, turning right at 40km onto a lane. This leads to the north-eastern shoulder of Paddock Hill.

The walking route continues over the hill and then descends to cross the Glenmacnass road. If Laragh (a lively village with a good choice of accommodation, shops, pubs and restaurants) is your destination remain on the road for 1km.

If continuing to Glendalough remain on the route which immediately enters Brockagh Forest – with its all too obvious evidence of recent timber harvesting and replanting. This is followed by the hauntingly scenic approach to Glendalough, which provides a welcome contrast and a choice of accommodation.

Those who have the time to spare could profitably spend a whole day walking and exploring the Glendalough area as it has much to offer both scenically and historically.

The Wicklow Way crosses the main valley floor, just after the Visitors Centre, via a footbridge over the Glendasan River, and continues up-valley to Poulanass waterfall. Here the trail turns into the Lugduff valley and the start of a 4-5 km uphill trek of 400m to the shoulder of Mullacor (657m), crossing the boggy saddle between it and Lugduff on a boardwalk.

A descent of similar magnitude follows into the Glenmalure Valley. This provides panoramic views up the valley, along Lugduff ridge and then southwest to Art’s Lough, Fraughan Rock Glen and Lugnaquillia (Wicklow’s highest mountain) on the descent to the end of this stage at the Glenmalure Lodge at 62km.

Birchdale House B&B in Greenan are nearby and will gladly collect guests from the trail by prior arrangement.

This is a slightly longer stage of the Wicklow Way that takes the walking route through the southern upland section and into the rolling hills of southwest Wicklow. It finishes with views west to the flatter farmland of County Carlow.

Beginning with an ascending trek through the pleasantly forested slopes of Slieve Maan, the trail reaches (and briefly stays on) the Military Road after yet another 400m ascent over a distance of some 6km. The walking path then circles the upper slopes of Carrickashane (508m) before descending to reach the Ow River valley at the Iron Bridge at approximately 75km from Marlay Park.

Iron Bridge, Aghavannagh, is sometimes used as a stage end. This can either be walked as a short stage from Glenmalure (14km) or a longer stage from Glendalough (30km). There is limited accommodation near Iron Bridge in Aghavannagh, if it is not possible to source a room here then it is possible to arrange transport through a B&B from one of the surrounding villages – Aughrim, Glenmalure, Macreddin or Moyne.

The stage finishes with a quiet road walk southwards to the tiny and once picturesque Georgian hamlet of Moyne at 84km which offers accommodation nearby and a shop at Knockananna, 2km to the west. This point marks the end of the mountain stages as the terrain changes to the quiet, leafy laneways and green roads of the gentle hill-country from here almost to the finish at Clonegal.

From Moyne, the Wicklow Way follows an easy walking path round the base of Ballycumber hill and Coolafunshoge to reach (and briefly follow) the busy road from Hacketstown to Tinahely at 95km. This makes an ideal stage-end for those who broke the journey at The Iron Bridge.

The colourful array of wild flowers along the hedgerows is a sheer delight from here to Clonegal as each jostles for a maximum share of sunshine.

A leafy green road contours the lower slopes of Muskeagh Hill and onwards to Mullinacuff and Stranakelly cross roads. Here Tallon’s Pub, it’s known to all as ‘The Dying Cow’, provides a perfect excuse for a thirst-slaking pint to celebrate crossing the 100km line at Mullinacuff.

A further 6km brings the Wicklow Way to the busy R725 road to Shillelagh. However, if planning to stay in Shillelagh, a busy road-walk is avoided by remaining on the Way as far as Raheenakit Forest, then taking the minor road via Ballard Cross to reach the village.

This stage of the Wicklow Way is in two sections; the early walk through Raheenakit Forest and around Stokeen, Moylisha and Urelands hills contrasts sharply with the final kilometres along the broad valley of the Derry River, from the Wicklow/Carlow boundary at Wicklow Bridge, into Clonegal.

Either Sean O’Duinn’s or Osborne’s will prove a fitting location in which to celebrate your achievement of completing the 127km walk, as you await the arrival of your pre-arranged transport to nearby accommodation. 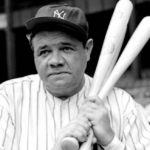 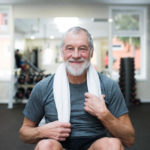