The summer is but a distant memory now but that shouldn’t mean we have to hibernate away for till spring brings warmer climes once again.

Plenty of people choose to head towards Europe for city breaks, Christmas markets and skiing but there’s plenty to do closer to home – and one of the biggest events coming up is Derry’s massive Halloween festival.

Established 31 years ago by the people of Derry as a small community event, the “Banks of the Foyle Halloween Carnival” has developed to offer locals and visitors alike a unique and authentic experience. Get ready for a full-on fear factor with haunted houses, haunted walks and costumes so good, they’re scary!

A wide range of activities for all ages across over 40 venues throughout the Derry City & Strabane District Council area are planned. Last year’s festival definitely was a success, with 30,000 people taking part in the grand finale event and 75,000 people attending the festival in total.

The theme for this year’s event is likely to be an extension of 2016’s ‘Out of this World!’ and is currently being developed with local arts and cultural groups and aims to reflect a sense of place and occasion.

It is being planned by a major carnival creation programme from August to October this year, together with internationally recognised carnival artists and local arts groups and mentors in partnership with communities and carnival service providers. The Council said that over 700 participants will be involved. They also expect the audiences to be at 35,000 for the parade and fireworks.

The fireworks display this year will include additional innovative pyro elements creating a unique spectacle event for audiences. Activities for children will include interactive storytelling, theatre performance, crafts, film screenings in a range of venues including the Guildhall, Alley Theatre, Tower Museum, Craft Village and Melvin Sports Centre among others.

A harvest market is also planned for Derry and Strabane linking to an Apple fair in Castlederg on October 28, where cider making and tasting events to form part of the events along with a best apple cake in the world competition. There will also be a scarecrow trail, music, street animation and dressing.

The festival has grown to become one of the largest Halloween Festivals in Europe and the largest in Ireland and the UK. Over the last four years Strabane has also developed a standalone Halloween programme which has grown year on year.

Queens Quay, Derry
Tuesday 31st October from 7pm
See the finest carnival, circus and street performers as they make their way through the city centre in the largest Halloween street carnival and costume party in Europe!

Tuesday 31st October 2017
The sky will be alight with colour over the River Foyle and River Mourne to celebrate the finale of the Halloween celebrations with spectacular firework displays.
Derry: 8pm, River Foyle
Strabane: 8.30pm, Upper Main Street Car Park 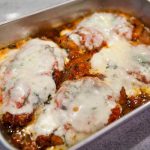 Meal of the Month: Chicken Parmesan