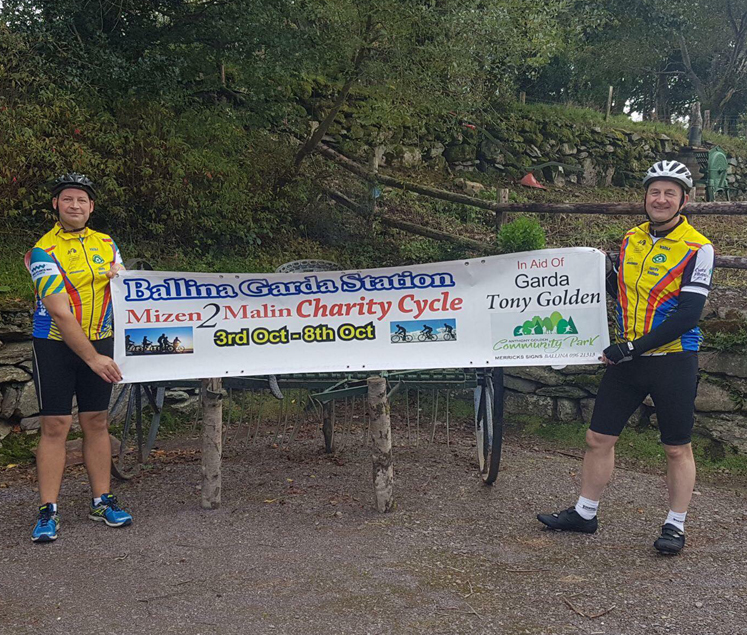 A group of 40 cyclists, comprising of members of An Garda Síochána and the Ballina community, are currently undertaking a challenge of a lifetime; an epic six-day Malin2Mizen cycle to raise funds for a community park in the town, to be dedicated to the memory of the late Garda Anthony Golden.

The 650km cycle began at Mizen Head on 3rd October with stops en route in Bantry, Tralee, Gort, Ballina, and Ballybofey before reaching Malin Head on 8th October, and has been supported by An Garda Síochána and community members all along the route.

Speaking with Mayo News, Superintendent for the Ballina district Joe Doherty, who is taking part, said the initiative is also serving to further strengthen the strong positive connection between An Garda Síochána in Ballina and the local community.

“As District Officer at Ballina Garda Station, I wish to compliment the local community of Culleens on this fundraising initiative for the development of the Anthony Golden Memorial Park. Ballina Gardaí are delighted to be part of the fundraising endeavours by organising this Mizen2Malin cycle.”

“There has been huge local interest, and I am very proud that two thirds of the participants supporting this great cause are from the local community, showing the strength of the bond between the community and local gardaí. I again would like to sincerely thank Claire Cooke, Chairperson of the Anthony Golden Memorial Park committee, for all the assistance and co-operation she and her committee have afforded An Garda Síochána at Ballina Garda Station,” he said.

The Anthony Golden Community Park Trust is a voluntary organisation, founded with the objective of establishing a community park at Culleens, Killala Road, Ballina as a memorial to the late garda. He was shot dead while unarmed and on duty in Co Louth on the evening of October 11, 2015.

In a fitting tribute, the group proposes to develop a community and sporting facility comprising of an all-weather football Astro Turf pitch, hurling wall and community centre to facilitate groups throughout Ballina.

The Anthony Golden Memorial Park committee hopes to have raised sufficient funding to purchase the land on Killala Road by the end of 2017. They then plan to seek additional funding for the AstroTurf pitch and community centre.

“Garda Tony Golden died a hero on duty in 2015. It is fitting that he be remembered and honoured in the community where he grew up. What better way that to build a community facility in his name in his home town? This brave young man should not be forgotten,” committee chairperson, Claire Cooke said.

Chief Superintendent Pat Diskin said he was honoured to take part in the cycle with members of An Garda Síochána and the local community in Ballina.

“It is at times like this that the true spirit of community engagement between An Garda Síochána and local communities is so important. The memorial park in memory of our dear colleague Anthony Golden is a fitting and poignant tribute to his memory. I commend all involved in this cycle and wish them all every success.”

Donations can be made via lodgement to a bank account, or online by searching for ‘Garda Tony Golden Mizen2malin Cycle’ on www.GoFundMe.com.