Ireland’s Own Devil’s Island: A Brief History of Spike Island 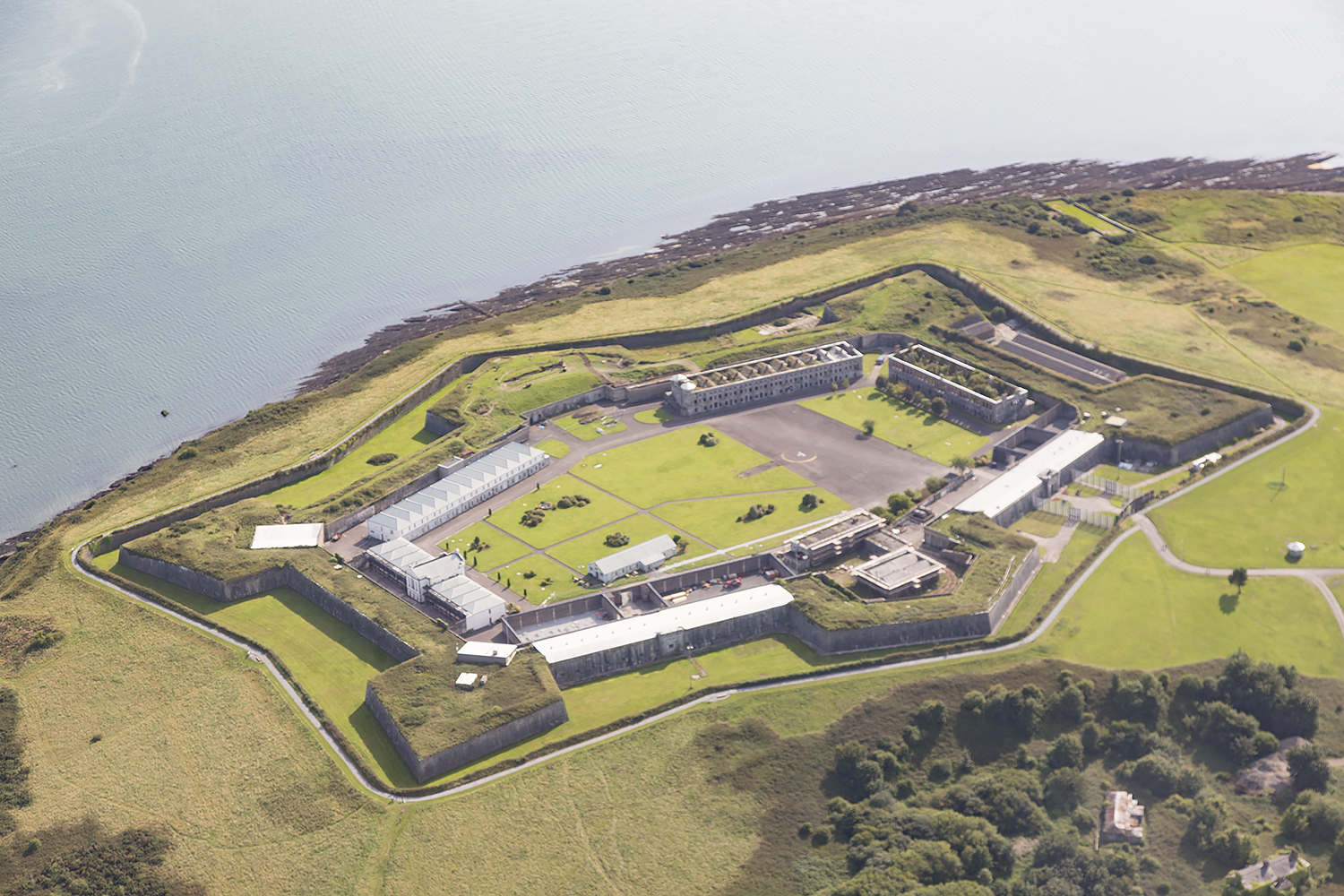 Cork harbour has long held a significant place in Irish history as Europe’s last port of call before the Americas. As ships with emigrants, soldiers and royalty have all come and gone through the harbour, they have all had to navigate around the infamous Spike Island. Down through history the island has served as a monastery, a staging point for convicts sent to Australia, a military base, a prison and now possibly a tourist attraction.

According to ancient manuscripts, Saint Mochuda (also known as Carthage) first established a monastery on the island in 635 AD. However, today no visible evidence remains of the structure. It is thought that the monastery may have been completely destroyed by Viking raiders from 800 AD onwards, given its place at the mouth of Cork harbour it would have been rich pickings for any foreign raiders.

Over the following centuries the island was mostly uninhabited, except for various smugglers who are thought to have made use of the islands discreet caves. Then in the late 18th century, Spike became a place of strategic and military importance. The American revolution in 1781 and the French revolution of 1789 served to make the British monarchy fear for its existence. Seemingly surrounded by republican revolutionaries on its south coasts, Britain strengthened its military defences, including those on Ireland’s south coast.

From 1792 onwards, construction of Fort Westmoreland began on the island. Named after the Lord Lieutenant of Ireland at the time, the Earl of Westmoreland, the fort was built in a star shaped formation. A flat, circular base was also landscaped from which artillery could have an easy reach across the harbour. This also brought the first convicts to the island as hundreds of prisoners were used as forced labour to build the fort.

However, the Napoleonic forces of France never attacked Cork harbour and by 1847 the island had become a penal station. Britain had long been sending its convicts to the rest of the empire but by the mid­nineteenth century Australia, with its huge expanse of open land, was being increasingly used as a long distance prison. Spike Island and Dublin thus became the last staging points for convicts condemned to the colonies.

The type of crimes that could get you a place on a convict ship to Australia were sometimes extremely petty. Stealing food or being found drunken and disorderly could result in a sentence of seven years on the other side of the world. Harsh, given that Spike Island began exporting convicts as the Great Famine took hold in Ireland.

There are countless examples of Irish men sent to Spike Island to await “transportation” to the colonies, if they survived the perilous journey it is doubtful they would ever return home when their sentence was served. In November 1847, Joseph Connell was given seven years for ‘stealing potatoes’. In July 1849, Michael McGurk was sent to Spike for ‘stealing cereal articles’. In July 1852, a 60­year­old man, John Morgan from Drogheda was convicted of stealing four chickens. He died aged 84 while still a prisoner in Port Arthur, Tasmania.

Another convict named William Mulhall, a 13­year­old, was given seven years for vagrancy. Near the end of his sentence he was convicted of smoking tobacco and his incarceration was extended. In desperation he tried to hang himself, only to be caught in the act. His sentence was again extended for this crime. During the famine, overcrowding in Irish prisons reached abhorrent levels due to the amount of petty criminals being locked up.

Conditions in prisons such as Spike led to diseases such as dysentery, smallpox and cholera spreading like wildfire. In the first year of the famine, the prison mortality rate went from 131 deaths the year before, to a staggering 1,315. In 1854, Spike became the worst prison in Ireland when 238 prisoners died on the island, 11% of the island’s population.

Many of those who died on Spike were buried on the western side of the island in mostly unmarked graves. On the centenary of the famine in 1947, an area on the burial site was walled off and a Celtic cross erected to commemorate all those who perished there. According to the national archives, 757 convicts died on Spike Island during this time.

However, recent research has discovered a new mass grave on the eastern side of the island. This grave is said to date to the years 1850 – 1860, when the mortality rate was at its highest. The depth of the grave suggests that there may have been foul play involved and an attempt to cover it up.

In 1848, John Mitchel, a prominent Irish nationalist was convicted of sedition. Mitchel was a solicitor and also a political journalist who wrote for the nationalist newspaper, The Nation. Then in the year he was convicted, Mitchel began publishing his own newspaper, The United Irishman, in which he was highly critical of British rule in Ireland from Westminster. At his trial he was sentenced to 14 years in Van Diemen’s Land – modern day Tasmania. He was quickly taken from Dublin to Spike Island where he would await his transport to the far side of the world.

Although he only spent four days on Spike he became the island’s most famous prisoner and wrote about his time there in his book, Jail Journal. In one extract he remarked on the contrast between the outstanding scenery outside the prison and the squalor inside it: ‘In this court there is nothing to be seen but the high walls and blue sky. And beyond these walls I know is the beautiful bay lying in the bosom of its soft green hills. If they keep me here for many years I will forget what the fair outer world is like. Gazing on these grey stones, my eyes will grow stony.’

However, Mitchel received good treatment on the island on account of his class. He had his own cell and exercise yard along with books to read. He also was allowed to send letters from the prison, privileges that the other convicts could only dream of. After an eight month journey, Mitchel arrived in Van Diemen’s Land and tried to settle in a land that was as far away from the lush green hills of Ireland as one could get. Eventually, he could take no more and escaped in 1853.

From there he made his way to New York where he established another newspaper, The Citizen. In 1875 Mitchel returned to Ireland where he was elected in a by- election as an MP for Tipperary. However, he was blocked from taking his seat as he was a convicted felon. Another by­election was held and Mitchel again won the vote. John Mitchel never took his seat in the House of Commons as he died in March 1875, resolving the government’s dilemma.

The End of Transportation

On the 2nd of October 1867, the last ship to leave Spike Island for Australia set sail with 62 Fenians on board. Sending convicts abroad had become an uneconomic way of dealing with prisoners as it became cheaper to incarcerate them at home. Another reason for ending transportation was that many convicts went on to live successful lives in the colonies. Charles Dickens even wrote to the Home Secretary in October 1840 to tell him most criminals now saw transportation as ‘a passport to opportunity and even wealth’.

In 1883, Spike Island once again became solely a military base as the last prisoner left. However, when the War of Independence broke out in 1919 the British Army began interning political prisoners on Spike Island.

When the Anglo­Irish Treaty was signed in 1921, Spike Island was designated as part of Queenstown (Cobh) Treaty Port. The Royal Navy eventually returned the Treaty Ports to the Irish state in 1938. Taoiseach Éamon de Valera saw the handover of Spike Island as a victory for his 1937 Constitution that laid claim to the entire island of Ireland. Only after the last British serviceman had left did de Valera and his cabinet set sail from Cobh to raise the tricolour on the island. Fort Westmoreland was renamed Fort Mitchel, after the island’s former nationalist resident.

While it would not have been known at the time, the handover in 1938 kept the island and Cork harbour out of the Battle of the Atlantic that would rage between the Allied navies and Germany’s Kriegsmarine until 1945.

In 1979 the island was handed from the Army to the Naval Service who used it as a training academy. In 1984, the government decided to turn Spike Island back into a prison in an effort to tackle Ireland’s joyriders. The 1980s saw a glut of juvenile crime as youths in cities across Ireland were stealing cars for no other reason but to drive them dangerously. After a number of deaths and widespread media coverage the government reopened Spike Island as a young offenders institution for 60 inmates. Not long after the fort once again became a prison, the inmates rioted in 1985, burning down half of the facility.

Spike Island remained a prison until 2005 when it was again shut down. During those 20 years there were only two escape attempts, in one incident six men constructed a makeshift raft and sailed to Ringaskiddy, five of them were quickly recaptured while the other was apprehended in Dublin. The other attempt was thwarted when prison officers discovered inmates trying to gain access to the main sewer pipe, an escape that would not have been worth the smell since half way down the pipe there are metal bars blocking the way. In May 2006 the then Minister for Justice, Michael McDowell, announced plans to build a €70 million ‘super prison’ on the island for 450 prisoners. However, the plans were shelved following lobbying by Cork tourism groups that see the island as a major tourist attraction.

Last year saw 26,000 tourists visit the island. With a project to transform Spike into an Alcatraz-
like attraction, it is expected that up to 300,000 thousand people could visit the island each year. This new use for the island is being led by Cork County Council, with a long term plan to have to have ferries running from a new marinas in the harbour, from Cork City, Midleton and Trabolgan. A new interpretive centre will open on the island in June. Planners also want to see a large aquarium, a centre on emigration, shops and restaurants built on the site; a far cry from its dark past. 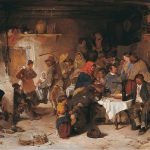 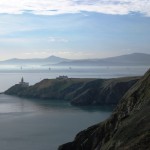